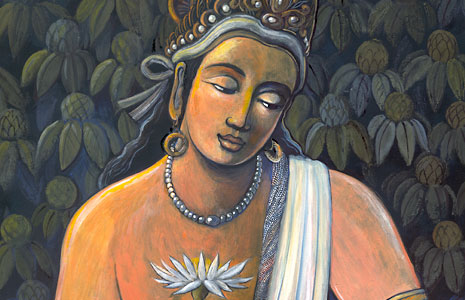 I remember a class I took with Marjory Barlow in 1988. She was explaining how at first you give these words, these phrases to your student knowing they will have little or no idea of what you are talking about. But then, gradually, through the subtle and clear use of your hands you give your student an experience of what those words and phrases actually mean. The student mentally and physically couples them together and voilà, when she or he thinks the words, without having to really do anything, the words themselves trigger an effortless response, a response that comes to feel almost reflex-like, a response that is at once supportive, organizing and liberating. It just happens, like typing in a domain name of where you want to go, clicking on search and, presto, there it is, and there you are.

It’s ingenious really, and effective. As one continues to study with teachers, and on one’s own, which is essential, this kinesthetic coupling of the words with this effortlessly revitalizing reflex-like response becomes ever more wedded, ever more precise and powerful, which is why having hands on work through one’s whole life is a good idea, which is why being part of an Alexander community is such a good idea, which is what I have chosen to do, which has been a blessing beyond words.

Alexander referred to these words, these phrases, as directions. He writes, direction is…”the process involved in projecting messages from the brain to the mechanisms and in conducting the energy necessary to the use of those mechanism.”  By mechanisms I assume Alexander is referring to this ever so delicate but dynamic reorganization of the head in relation to the neck, and of the head and neck’s relationship to the entire torso, and of the head, neck, and torso’s relationship, as a flexibly working unit, to the arms and legs.

If you are an Alexander teacher or a long term student of Alexander’s work all of this is old hat. Sorry, but I am going somewhere and need to begin at the beginning.

Now these words are a shorthand, an abbreviation for a complex psychophysical happening within us, and yet they they still strike me as a bit long and cumbersome. Let the neck be free so that the head can go forward and up so that the back can lengthen and widen, all together, one after the other. And then there are secondary directions that speak to the limbs as well, to the heels, knees and hips and to the elbows, wrists, and fingers, and to the tongue, (which I see as limb-like; think of a frog.)

It takes a bit of time to stream through these directions, especially at first. When we get proficient, perhaps just a few seconds. Marj Barstow, one of my mentors, once said to a student who was belaboring the process, “I wish I could say all these words to you at the same time, instead of one after the other.” Marj understood that this sequence of instructions had to be played more like a fluid arpeggio on a guitar rather than a separate collection of notes.

The very same day I had a class with Marjory Barlow I also had a class with Wilford Barlow. I loved watching and listening to them both. Wilford deferred to his wife saying, “Now this is just my idea. If you want to know how it really works, ask Marjory.” But I loved Wilford’s ideas, and his hands too. He said something like, (it was long ago), “After a time the words are not always necessary. The change we want can come about without them.” I wasn’t sure but my guess was that after we had for many years used our conscious mind, and with it language to reeducate our kinesthesia we could come to trust it more and more and simply let it work for us. Perhaps our kinesthesia is like a child who for many years needs guidance, but then gradually grows up into a capable and responsible adult who no longer needs looking after all the time.

Years have flown by since then, 30 years to be exact. I’ve had some time to think about this on my own, and so now I will share with you my thoughts on the matter.

Let’s imagine you are on the road, traveling in some foreign country. A cold snap blows in unexpectedly. You decide to buy a scarf and a pair of gloves. You find something you like, a bit expensive and so decide to charge it on your credit card. You open your wallet and notice your Discover card is missing. You pick up your phone and know their phone number because their phone number happens to spell DISCOVER. So instead of having to remember 8 numbers in sequence, you only have to remember one word.

What if I could find one word that could contain for me the full sequence of directions. I decided on the word ‘One’. ‘One’ would now mean for me Let the neck be free so that the head can go forward and up so that the back can lengthen and widen, all together, one after the other. The word ‘One’ would now be the verbal trigger for my entire Primary Pattern. After all, the word ‘One’ is in essence just a sound, a sound English speaking people decide means the number between 0 and 2. It is just a sound. The meaning is not inherent to the sound. English speaking people collectively agree on what that sound means. A person for whom English is a second language at some point had to learn what that sound meant. At first, in their mind, they may have said to themselves what it meant in their own language, but over time they no longer had to do that. At some point the word One, the sound One immediately meant to them the number between 0 and 2.

So, I thought, why could I not change the meaning of the sound ‘One’ and have it mean what I wanted it to mean? If for me the sound ‘One’ was coupled with Let the neck be free so that the head can go forward and up so that the back can lengthen and widen, all together, one after the other, and if that phrase was kinesthetically coupled with this effortlessly revitalizing reflex-like response, then all three of them were now coupled, like links of a fence.

I played with using the word ‘One’ as my condensed Alexander direction. I liked how fast it was. I liked that it was less wordy. Yes it lacked a bit of the specificity that Alexander’s words had for me. But with practice I got pretty good at it.

Then the thought occurred to me that I didn’t have to use a word at all. That I could just use a sound, given that, in essence, a word is just a sound. I came up with the sound, Paaaah. This worked much better than the word ‘One’. It had something to do with the fact that it had no meaning to begin with and so I had not to de-couple any meaning from the sound. The sound was soft and expansive and seemed never ending. I also had associations with the sound, one being Alexander’s whispered Ah, and the other being the sound Kyudoists, (Zen Archers) use to refer to the moment when the arrow is released from the bow. Paaaah. I didn’t lose much specificity when using the sound Paaaah. It was indeed a better container for Alexander’s directions, at least for me.

I will, however, never throw out Alexander’s directions. They are for me like some song from another era that I still love singing. Those words still move me.

More years went by. I was in Tokyo standing at one of these interminably long red lights. I was end-gaining. I wanted to go but the red light was telling me to stay put. “That’s its collective meaning virtually all over the world, even though it’s a color, not a word, and not a sound. It’s also an object. Gee, I thought, we can pretty much make anything mean anything. It is totally up to us!”

I decided it would probably be a good idea to continue letting the red stop signal mean stop. But I decided that instead of it meaning stop on a superficial level, I decided that it meant stop on a deep level, that it meant to stop everything within myself, to completely stop any unnecessary holding within myself, to completely stop waiting, to enter into a condition of profound Alexandrian inhibition.

There I was at this infinitely long red light in a state of radical non-end-gaining, wide awake, vividly aware of everything around me. When the light turned green and everyone began walking across the street, I didn’t want to go. I was so happy exactly where I was, but then I thought, “better to follow the simple directions”, and so I crossed the street as I had never crossed a street before, as if I were singing in the rain, without the rain.

And then the revelation came. What if instead of using an internal trigger, i.e., Alexander’s words, words that were being produced from inside my mind, what if I projected my mind onto the world around me? What if I had the world speak to me from the outside in, instead of me speaking to me from the inside out? Instead of my mind being inside my body, what if my body was inside of a big, benevolent mind? It was entirely up to me to decide what any word, sound, object or creature meant to me, so what would happen if suddenly everything, absolutely everything  was saying to me, directly, wordlessly, Let the neck be free so that the head can go forward and up so that the back can lengthen and widen, all together, one after the other?

Ah, so that was what Gary Snyder meant when he wrote, “The world is our consciousness, and it surrounds us.” I got it!

Could it be this simple? Could anyone do it? Not really. First it would be necessary to have learned how to couple Alexander’s Primary Movement to some trigger, and perhaps Alexander’s words were the perfect first trigger because they are so specific and clear.

Again, I returned to my new insight.

Suddenly no words were needed at all. It was as if every object, my coffee cup, my keyboard, my computer screen, the flowers by the chair, the sound of the heater were all saying to me, directly, immediately, wordlessly, just through their sheer existence, “Bruce, free yourself in relation to me. Free yourself in relation to me. Everything was somehow kinesthetically coupled to my Primary Movement.

No longer was there me trying to speak to me from somewhere inside of my body. The entire world and everything and everyone in it was now freeing me, directing me, opening me, awakening me. The Voice of the World was speaking to me and I was listening. Not only was I listening, I was following its direction, taking its good and loving advice.

Why not free myself in relation to everything and everyone?

That must of been it, the meaning of the Flower Sermon given by the Buddha. Sakyamuni gives a wordless sermon to his sangha. He holds up a white flower. No one understands it’s meaning except Mahakasyapa, who smiles.

That simple flower, and the meaning we bestow upon it speaks to us, in silence, inviting us back to who we are.

Teaching By Hand/Learning By Heart