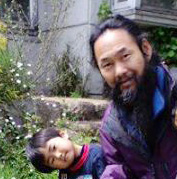 Rabbi Abraham Heschel said, “You cannot know one religion unless you know two.” I’d say the same when it comes to somatically-based practices as well. I forged a career as an Alexander Technique teacher, but I delved deeply into Tai Chi, Aikido, and Chanoyu. I became able to look at the Alexander Technique not only from the inside out, but from the outside in as well.

Two people I have learned a lot from were both trained in the Rolfing tradition. It so happens they also trained with me. But they went on to synthesize their knowledge in ways that have been illuminating and helpful to me, and to many others. I would like to introduce these two guys to you.

Kan may be the only person in Japan who is a certified Rolfer, Alexander Technique teacher, and Feldenkrais Practitioner. He’s a hidden treasure that few people find. Twenty years ago, I trained Kan to be an Alexander teacher. Now I am happy to say that Kan is my sensei. Every week we exchange work. Every week I leave his studio feeling comfortable and free, full of fresh insights into how my body is designed to work.

Because Kan’s an Alexander teacher, his own coordination is excellent and he knows how to make deep contact without using excessive force. His hands are firm but at the same time very soft. Nonintrusive. Being a Rolfer, Kan gets in there and reorganizes my body into better balance. Then, through his Feldenkrais training, he knows what movement patterns I need to play with to re-enforce my new found integration.

If you live in Japan, and you want to get your body comfortable and back into better balance, and especially if you are an Alexander trainee or teacher, I strongly suggest working with Kan.

I love learning from my students. It’s kind of like a parent who raises a child, and then that child grows up and helps out his parents. That’s how it feels.

Kan is a real gift.

Michael-sensei took a workshop with me some 25 or 30 years ago and could not understand how I got the changes I did in people without using any force. Being trained in Structural Integration, he didn’t know that was possible. He made a commitment then and there to study with me. He would come to a 5-day event, stay for 3 days, come up to me looking overwhelmed, and then leave. For the next six months Michael would assimilate, on his own, what he had learned and then six months later return again for another 3 days.  He knew how he learned best. I respected that. He told everyone he wasn’t in a hurry. Said he was in the 20-year program. He was. Twenty years later he emerged as one of my most creative and talented students ever to graduate the Alexander Alliance.

Essentially Michael Mazur figured out how to give Rolfing sessions with people standing up rather than lying down. He learned how to harness gravity and get it dropping beautifully through people’s bones into the ground. And he could do this with hands that no longer needed to use force. He worked from the ground up and not from the top down, which was a revelation to us at the Alexander Alliance. Michael was tapping into ground support by working from the bottom up. When working from the top down, we were tapping into uprighting reflexes and mechanisms that created support through suspension. Both were invaluable.

Michael spends half the year teaching just outside of Amherst, Massachusetts, then in December he heads down to Palm Beach, Florida where he spends the other half of the year teaching, but mostly enjoying himself, which he is good at. Michael is fun. Oh yes, Michael makes his way to Germany once a year and teaches for Alexander Alliance Alumni and for others interested in his way of working.

So if you live in America or Europe I suggest making your way to Michael-sensei. And if you live in Japan, then I’d get on the Hankyu and get off at Nishinomiya Kitaguchi, and introduce yourself to Kan Nishioka.