Taking Care of The People Who Take Care of People 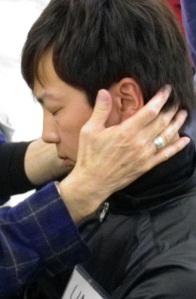 Kobe Workshop Given by Bruce Fertman

First Anniversary of the Tohoku Earthquake

I want to thank Dr. Ichihashi for inviting me to work with all of you.  Dr. Ichihashi has studied with me a little, and thought my work might be helpful to you.  So I will do my best. Yuroshiku Onegashimasu.

This weekend is a very important weekend in Japan, the first anniversary of the Tohoku/Fukushima disaster.  This is foremost in my heart and mind. I think “fear” is the common theme between natural disasters, like the Kobe earthquake on January 17th, 1994, at 5:46am, or the 9-point earthquake in Tohoku on 3/11/11, at 2:46pm and Alexander’s work.  How do we turn fear into stability and mobility, so we can function?  I was in Japan during both these earthquakes. I did not experience them.  But I feel deeply for all the people who died and suffered in these earthquakes.

Now, Alexander’s situation, and the situation for so many thousands of people in Kobe and Tohoku are stories of a very different magnitude.

Here is Alexander’s little story.  When he was 19 years old, one night he had a performance, as an actor, and an important newspaper critic was going to be in the audience, and this newspaper critic was going to write a review of Alexander’s performance in the morning paper.  Alexander got really scared, panicked and, midway through the performance he lost his voice.  That was his personal natural disaster. He went to doctors but there was nothing physically wrong with his voice.  So he decided it was because of his own fear.

He began to study what happened to his body when he became afraid.

Gradually he learned to feel what he was doing in his body when he got afraid, and he learned how to let go of that fear.  Then he taught other people how to do this.  He became famous for how he used his hands to help people turn their fear into stability, mobility, and a high level of functioning. Tomorrow I will work with some of you in much the same way that Alexander worked with people.  I will use my hands to help you experience the turning of tension and fear into structural support, greater mobility, and a higher level of functioning.  But there is a lot that I can teach you today, without using my hands, that I think will be helpful to you.

Most people, during emergency situations are overcome by their fear. These emergencies could be “inner earthquakes”, like Alexander’s, or very large environmental earthquakes like Kobe and Tohoku. But many people mysteriously let go of their fear, and they begin to function at an extraordinarly high level, and they do extraordinary things, often performing very brave and selfless acts of loving kindness.

Why can some people do this and some people cannot?  I have no idea.  I really don’t know.  But to some degree Alexander learned how to do this.  I don’t know if he could have done this during a real earthquake. Maybe. Maybe not.

So the techniques I will teach you today will be for you. They will help you learn how not to hurt yourself when you are helping other people.  People work very hard in Japan. You often work 10 to 12 hour days, take very short breaks, or no breaks. You work fast.  When you get sick or hurt often you just keep working anyway. Vacations are few and far between. Maybe this is Gambatte, but it is also a recipe for injury – physical and emotional.

Sitting on a plane, happy, heading back to Japan, to a place I have come to love, the captain announces some bad news.

We land in Osaka airport, two hours after 5000 people die in the Kobe earthquake. 5:46AM. People asleep on the first floor of their homes as the second floors drop square on top of them. We stare into the TV, into the classrooms where bouquets of flowers stand upon empty desks, where only yesterday young Japanese children sat.

A year and a half later, another visit to Japan, and another workshop, an unusually quiet workshop given on August 6th when exactly fifty years ago Americans dropped a nuclear bomb on all the people who lived in Hiroshima.

During the workshop, a head nurse, in a large Tokyo hospital, showed me how she visited and talked to patients, how she bent over a person and listened to that person, and cared for that person. I watched, and then as I used my hands and released her out of her hunched over, concerned, and very painful upper back, I asked her, “Who will take care of you, as you care for so many people?” She became very still, very quiet. Silent tears began to well in her eyes. They ran down her face. She started to quietly sob, and through her sobbing she whispered, so only I could hear, that she had not thought of herself for over thirty years.

Today I will teach you some self-kindness techniques. They are simple and doable. These techniques are effortless and pleasurable.  They require no skill or talent.  All that is necessary for these techniques to work is the slightest shift of attention, and a little imagination.  That’s all.

Self-kindness is beautiful to see. True kindness spreads inward toward the person being kind, and simultaneously outward toward others and the world.  That’s because true kindness does not perceive boundaries. It is a force of nature, like the sun, or the wind.  It’s a force of human nature.

From: Uncategorized
← Quipping Away At The Truth – Santa Fe, New Mexico
Gone In Body But Not In Spirit – In Memory of Those Lost In Touhoku →
No comments yet